Burial Ground was commissioned by 5th

Spiecies, based in Toronto, Canada.

This edition is a facsimile of the original score provided by the composer.

Burial Ground is based on the well-known ground ‘When I am laid in earth...’

from Purcell’s Dido and Aeneas. The original aria appears either fragmented

or in its entirety and with varying degrees of comprehensibility throughout

the piece. Its harmony and accompaniment are nearly always preserved, but

they are masked by superimposed music drawn predominantly from the

from the use of extended woodwind techniques. Formally, the piece is a

departure and/or arrival points. The title - a pun - refers to the work’s emotional

as well as its formal character. The text of the original aria reads as

When I am laid in earth

No trouble in thy breast.

Remember me, but oh!

from a 5th Species concert. A self-taught singer and instrumentalist of

extraordinary talent, Chari was a unique individual. His idiosyncratic temperament

a decade. My musical choices in Burial Ground were triggered by memories

from this friendship and by the text of the original aria.’ 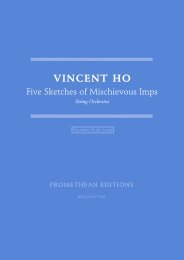 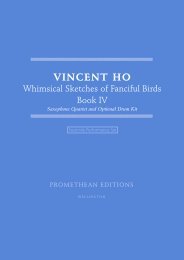