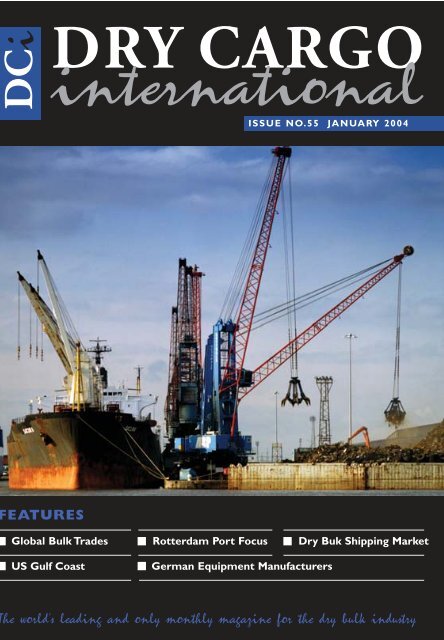 Gottwald Port Technology (GPT) has had another good

year for mobile harbour crane deliveries in 2003.The

company sold a total of 64 cranes during the year, which

has been achieved despite a weakening dollar.

If 2003 has been remarkable for the company: it is

because four-rope grabs have ‘bitten a significant chunk’

out of the higher-capacity bulk handling equipment

Whilst the market for grab handling gantries in

France (La Rochelle and Bordeaux) for example have

proved that even though the overall market for mobile

harbour cranes is not growing, GPT can be satisfied with

The four-rope variant — referred to by Gottwald as

sales in 2002. At the beginning of December last year,

the percentage had risen to 37%! GPT recommends

duties. For operations up to 60% bulk handling, a

illustrate this better than

the recent delivery of

Terminal (ABT), which is

a member of the

terminals in the Port of

Gottwald and it will be

The unit will discharge

coal and other bulk

materials with a capacity

Belgium and the Netherlands.

The new unit is also the ninety-ninth crane to be

delivered to Belgium by Gottwald.

Whilst ABT now has two HMK 360 EGs, the first of

this type was delivered to CBM in Ghent where it is

mainly used for handling coal, coke but also other bulk

commodities. CBM is also part of the Sea-Invest Group.

improve our productivity.” The new crane has a lifting

capacity of 50 tonnes at 40 metres and, as already

reported in the November 2003 issue of Dry Cargo

International (see p38), the machine can be used for

One other factor seems to have determined

harbour cranes at quay 83 in the Port of Antwerp. “This

station, with its broad spectrum of services, guarantees

that ABT receives immediate response when technical

employs 15 technicians and offers a wide range of

GPT provides a comprehensive range of

and HMK 360 EG were mainly developed to meet the

but are also in demand by other customers around the

Earlier this year, Gottwald sold its first two ever

four-rope grab units to Latin America, one to Rocha Top

the other to Luxus Graneis as reported on p32 of the

commissioned in January 2003 handles a broad

and grain. Peak loads of 1,000tph have been reached,

As mentioned earlier,ABP Immingham has purchased

three HMK 280 EG units which are used for coal

its initial success with these machines,ABP (Associated

batch was delivered in 2002. Five of the six cranes are

now fully operational and are used for handling different

will be commissioned early the new year.

Rail-mounted portal cranes are another speciality of

GPT. Since its launch in 1998 at IC Rail Marine Terminal

(USA), the company has sold a total of 17 HSK types

worldwide, ten of which were sold during 2003. With

the exception of a two-rope unit sold to Sidmar in

machines have been deployed in Russia. Tuapse and

Novorossijsk now have four each and Vladivostok has

one. The iron ore terminal at Quinhuangdao in China

has two and Bordeaux also has two units.

with rails but which are too narrow for normal rubbertyred

units. All Russian units have the same rail gauge of

10.5 metres, says GPT. The Russian machines have in

common is that they are fitted with both a diesel

generator and cable drum. The exception is the unit

deployed in Vladivostok. This machine relies on external

In total, the company has sold more than 850 mobile

harbour cranes. The company currently has a workforce

of around 650 employees in Düsseldorf and the turnover

With over 850 cranes already sold,

unchallenged as the heavy-weight

champion in the field of stateof-the-art

which also makes us the most reliable

cranes are a force to be reckoned

with when it comes to bulk handling.

tonnes an hour, these gentle giants

Bulk-handlers such as ABT, CBM,

Bordeaux and Port of Qinhuangdao

make full use of these performance

levels on a daily basis.

If you want to move more in professional