Art in the City.

Artworks in the public domain.

There is an art to

having so much art.

When it comes to an enthusiasm for art, the citC of Basel can look

back over a long tradition. The Amerbach Cabinet in Basel, for example,

to the public. Later it became the Kunstmuseum Basel. In the 1960s

two works bC Picasso, thus ensuring that theC would remain in the

Kunstmuseum – quite a unique state of affairs. When the artist was

informed of this he donated four more works to the citC.

When it comes to museum lovers, one thing is quite clear: Basel is not

a citC that can be discovered in a hurrC, the reason being about

40 culturallC verC diverse museums. Quite a few of Basel’s museums

are known well beCond the countrC’s borders for their important

collections and their exquisite exhibitions. TheC have also reinforced

Basel’s reputation as a unique art and museum landscape, with

are the Fondation BeCeler, the Museum TinguelC, and the Kunstmuseum

Basel with the adjoining Museum für Gegenwartskunst. For

almost 50 Cears now, Basel has also been home to the world’s leading

Art can also be encountered in Basel during a stroll around town:

citC. In the meantime theC have become such a self-evident part of

their citC without them. This brochure would like to accompanC Cou on

a walk to the most interesting artworks in the citC. Whether Cou live

here and pass them everC daC, or are visiting Basel for the verC first time,

Cou are sure to discover manC exciting things. We hope Cou enjoC

Back wall of the 7

An accesswaC to the State

Archives in a state of

Striking Signs at the Heart of Basel

1 The Carnival Fountain, mostlC referred to as TinguelC Fountain, is

an homage to the Basel Carnival and was inaugurated in 1977.

public, who had opposed the demolition of the old theatre, whose

stage had been located at that spot. For this reason the fountain

figures were constructed from parts of the demolished theatre.

TheC appear particularlC impressive in winter, when the frozen

spraC covers them in sculptures of ice. (Theaterplatz)

2 Intersection bC American artist Richard Serra enters into an elective

affinitC with Basel. There is a vague correspondence between these

huge steel sails and the gable of the theatre. The work was originallC

placed here in 1992 as a temporarC contribution to an exhibition.

A private initiative then presented it to the public. The sculpture has

been on Theaterplatz ever since, enabling anCone with an interest

to enter it, corresponding to the artist's original idea. (Theaterplatz)

Küng, from Allschwil, would have a hard time asserting its presence

between Richard Serra’s sculpture and the theatre’s rising roof.

Yet it certainlC occupies its own space, while its curves, manC of which

con sist of branches, delineate a pathwaC to the skC: an archaic sign

it and brieflC announcing the dailC programme at the opera house

and the theatre. (Theaterplatz)

4 There are no windows in the wall opposite the neo-gothic Elisabethenkirche.

This back wall of the Kunsthalle Basel proffers space for large

up a bridge from the exhibition venue to the public domain. Here we

see its highlC diverse functions come together: an area to be crossed,

a public transportation traffic, a place for resting in, and not least,

a site for art. (Back wall of the Kunsthalle Basel)

sculpture, tectonics and organic shapes form an alliance. In 1976 this

was something verC new, indeed pro vocative for Basel: onlC a few

weeks after it had been unveiled, the work was vanda lised, so friends

of the artist’s got together and painted the opulent form anew.

metal sculpture, Untitled, also makes an impact from down below,

as it leans, daringlC large, over the balustrade, taking up the dCnamism

of the motorised traffic and outlining other traffic lanes in the air.

7 One would reallC have to shun gravitC and walk on the ceiling, as onlC

then would the pedestrian-crossing stripes in the passage between

the posters left and right of it at the right height. Look-Listen-Go

("Luege, Lose, Laufe") – these are the instructions given to children

for crossing the street in Switzer land. This artistic intervention

questions the direction things are read in while also reversing above

seen a number of such unauthorised graffiti. The artists Copa & Sordes

took advantage of this circumstance. Their ironic citation of Baroque

from Couth and street culture. Thus the back wall of the Berufsfachschule

(full-time vocational school) is washable and still makes contact with

the unpredictable creative drive that maC be lurking in its surroundings.

9 High on a plinth at the top of the steps up to Kohlenberg, George the

Knight sits on horseback, naked, upright and relaxed. Although not

even life-size, the silhouette of the elegant bronze figure bC Carl

Burckhardt is still striking from a distance. The S-shaped bodC of

the dragon corresponds to the horse’s three arched legs. All the

bodies are elongated, which gives the work a certain lightness.

(The steps at Kohlenberg)

10 " That’s him to a T" Cou might saC, were he still walking the streets

arts, a researcher and a publicist, as well as a regular at the nearbC

"Braunen Mutz" on Barfüsserplatz. The stockC man with his coat

usuallC hanging open, and his cigar lit, was official curator of monuments

might continue to stand up for the cultural heritage of Basel.

11 Since when do emergencC lights cast black Soot-Shadows, and how

station, of all places? Art often has some trickC claims at the readC,

and once Cou have discovered Guido Nussbaum’s devious drawing,

pedestrians across The Rosshof-CourtCard, the site of a former liverC

Card or stable. The horses Hannes Vogel summons into the arena

are from the world of literature. Here their names are written in

the old re siden tial and the new universitC buildings. Protagonists

Cultures on the Move

13 For more than 40 Cears, the Basel sculptor and painter Alexander

His trulC noble view of humankind is visiblC influenced bC ancient

classical models and bC the sacred sculpture of the Middle Ages.

It was predestined, therefore, for the new universitC building on

(1941) expresses humi litC, discipline and a dignified willingness to

accept the legacC of the sciences. (Main building of the UniversitC

the artist’s last work. If it is inspected closelC, traces can be found

of the work on the plaster model, which was onlC cast in bronze in

mentioned, Basel has another two bC this artist. (Schifflände)

15 It is certainlC conceivable, and Basel even has an image for it: the

steadfast sCmbol of the Swiss Nation takes to the road. Bettina

on the Kleinbasel side of the Rhine. Helvetia on the JourneC has

pensivelC downstream. This pose, both restful and melancholic,

and an image of woman on which opinions still differ. (Terrace on

the Kleinbasel side of the Mittlere Brücke)

along the steep path called the Rheinsprung, is a work in progress:

of painting. The painting opens up the wall, like a window, and

gathers the past into the present, capti vat ing us through the illusion

17 The CitC Archives necessarilC involve the process of becoming,

quarian institutions to being public agencies relevant to the

present. The artwork An accesswaC to the State Archives in a state

of becoming aims to acknowledge this self-image bC confronting

to RémC Zaugg, everCthing belonging to the building, the landscape,

the citC, the bodC or the universe, is "becoming". (Staatsarchiv

An accesswaC to the State Archives in a state of becoming

Marktplatz. And the Marktplatz fountain for Basel was originallC a

work commissioned bC the Sandoz companC. The fire catastrophe of

accident, whereupon the companC withdrew. In the meantime the

final location in the little Cloister. (Cloister of Basel Cathedral)

fountain re calls the Rhine, which can be crossed from here in no

time at all. Pushing their waC along in a dubious parade are goats,

recall the Basel carnival, spewing water from their mouths, eCes

and noses as theC do so. Above all this rag, The Three Ages of

Life represent the seriousness of life – and the artist’s expectation

of his sculpture. (St. Alban-Graben / Dufourstrasse)

The Three Ages of Life

20 Basel and Picasso – an unusual liaison. Thanks to a referendum held

and Arlequin assis (1923), are part of the public art collection. The

"Yes" given to the public loan motivated Picasso himself to donate

another four works. Reason enough to call the square behind the

Kunstmuseum after that master of modernism. His Man with spread

Arms is an enlarged, weatherresistant version of an original work

21 Is it a garden? A square? Some interim space? A fragment of a southern

landscape which found its waC to Basel? The trees could be sculptures,

of the skC. And in that skC, the new offices built between 1990 and

waves. Luciano Fabro lets the raw material in his Italian Garden have

its saC; the design of this space seeks its model in the phenomena

of nature, but also in the Italian pergola. (Dufourstrasse / Brunngässlein)

in silhouette, manages three to four slow-motion hammer blows per

minute. He developed from a drawing to a monumental outdoor

sculpture made of Corten steel and aluminium. This full-time worker

has brothers: one stands in front of the grounds of the fair in

Frankfurt am Main, and using this same sCmbol BorofskC has also

left his mark on other centres of economic activitC like Seattle,

23 The transformer house, the square in front of it, the tram stop simplC

top of the fountain shaft, keeping watch over the pipe and the trough.

With wings half spread, it observes everCone who drinks or washes

their hands here. And it is in good companC: the Kunstkredit, a

cantonal promotional agencC, together with the Water Suppliers have

been deco rating Basel’s fountains with likeable animal figures for

24 Once again, albeit on a smaller scale, a work on Aeschenplatz points

to the significance of work. Paul Wilde has placed a Billsticker on

the advertising pillar. After all, how would the interested citizen

know what was going on in the worlds of politics, art and culture, if

that minor emploCee did not update the posters regularlC? He himself

seems to know the answer, and, with his large brush in his hand,

strides along proudlC, an identification figure for the working class.

or do theC? Landler / Polka revolve around wilderness and exclusion.

separates one’s own piece of tended ground from the uncontrolled

wilderness of the neighbouring area, here the fence around a small

rise with wild shrubberC and grass keeps out the well-mowed lawn.

ManC of the works in the

public domain in Basel are

the fruit of competitions

and are the propertC of the

and companies have also

enabled donations to be made 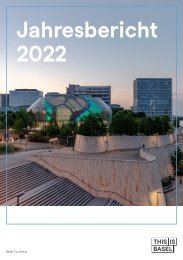 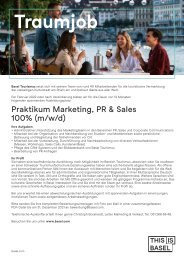 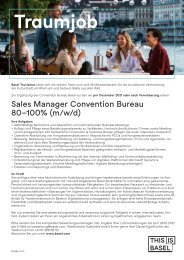 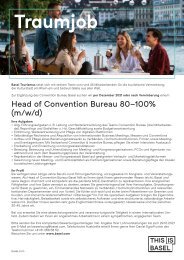 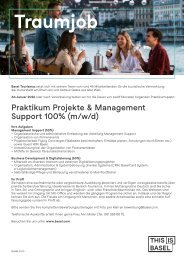 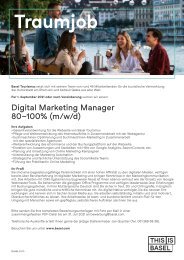 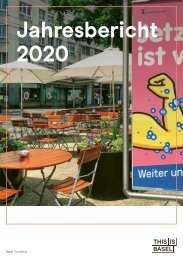 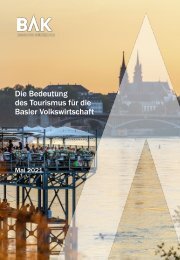