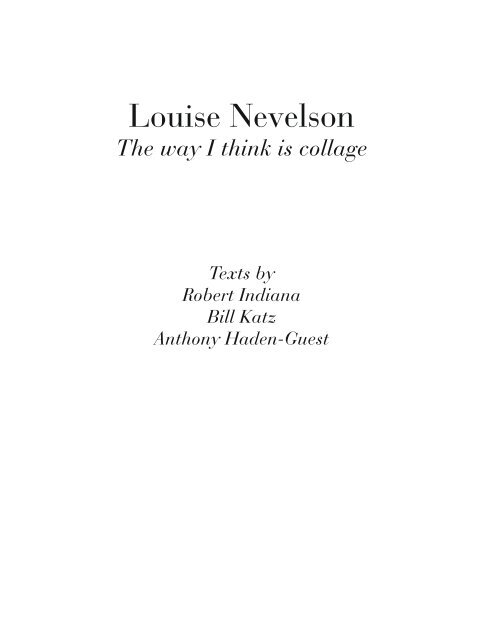 Excerpt from the book “Louise Nevelson – The Way I Think Is Collage”, the first monograph on one of the most important artists of the 20th century to focus on her collage works that spanned her entire career. Published by Galerie Gmurzynska on the occasion of an exhibition at the gallery space in Zurich.

Excerpt from the book “Louise Nevelson – The Way I Think Is Collage”, the first monograph on one of the most important artists of the 20th century to focus on her collage works that spanned her entire career. Published by Galerie Gmurzynska on the occasion of an exhibition at the gallery space in Zurich.

The way I think is collage

By the time I first laid eyes on Louise

Nevelson, which was soon after I arrived

in Manhattan, she had become, to adapt

for herself. She was not a National Treasure

- that’s a label pinned on individuals,

usually men, whose passions and poisons

have been safely expended in the past -

but a more formidable creature, a Sacred

Monster, seemingly a bit afloat above

mundane reality on the hovercraft of fame.

This, after all, is the woman who announced

during an Avedon shoot for Vogue “When

Face to face Nevelson could have an

astringent, take-no-prisoners manner but in

the wider world she owed that fame mostly

to her appearance, which is to say the

the exotic headgear, the clothing which, as

with an Edward Goreyesque grande dame,

veered from the operatic to the Haute Bag

dress, tablecloths, ornaments made out of

The mandarins of the art world who incline

to be suspicious of outré bohemianism - as

when Degas snapped “My dear Whistler,

you have too much talent to behave the way

you do.” - forgave Nevelson largely, or so I

would guess, because it was understood that

she was not just a needy eccentric, but that

there was an authentic streak of theater in

her life, as in her work (She hugely admired

well, has said that she told “half truths

to most people.” She would give utterly

contradictory reasons for her use of black,

for instance, or for her preference for wood.

Thus when she was 35 she said “I often hear

but somehow, for myself, I am always so

busy living in the present that I never look

back to relive my childhood but more to

search the ‘why and wherefore’ of things of

So. That childhood. She was born Louise

Berliawsky in 1899 in Kiev, which was then

Tzarist Russia, and she sailed for America

with her mother at the age of six to join her

father who had gone before, There was a

stop en route at the ship depot in Liverpool.

Of this, she remembered “I can still see

it filled with light, it was a fantasy. There

were many shops that I thought were houses

under one roof that could have been the

heavens. There was a store that sold dolls.

I had never seen a doll and was fascinated

by the eyes. When you laid her down her

eyes closed every time - I marveled at how

unhuman I was because my eyes could

Most Jewish immigrants to the United

States settled in the big cities but the

Berliawskys set up in Rockland, Maine.

There was little of Old Europe’s visceral

anti-Semitism in this rock-ribbed Yankee

community but plenty of un-neighborly

chill. Isaac Berliawsky would ultimately do

well in lumber and as a contractor but at

the beginning he supported his family by

picking bits and pieces he could sell from

absorbed in picking up and collecting little

bits and pieces of stuff too.

She was a shy, lonely child in Rockland.

And here let me introduce another lonely

child, Philip Haldane, who appears in The

only to Lewis Carroll. Philip, an orphan,

who feels abandoned by his older sister, sets

to building a city on a tabletop.

He was accustomed to the joy that comes

with making things, wrote Nesbit. He

put everything you can think into it; the

dominoes, and the domino box; bricks and

books; cotton-reels that he begged from

Susan, and a collar-box and some cake-tins

contributed by the cook. He made steps of

the dominoes and a terrace of the domino

box. He got bits of southernwood out of

the garden and stuck them on cotton-reels,

which made beautiful pots and they looked

served for domes, and the lids of brass

kettles and coffee-pots from the oak dresser

in the hall made minarets of dazzling

splendour. Chessmen were useful for

He worked hard and he worked cleverly,

and as the cities grew in beauty and

interestingness he loved them more and

more. He was happy now. There was no

time to be unhappy in.

I don’t want to be simplistic, just to suggest

that Nevelson’s Scavenger Aesthetic, the

urge that drove her to make her sculptures

and these collages, has deep, primal roots,

both formal and romantic. Nevelson would

later speak of her life as an immigrant child

amongst the Maine Yankees and she related

it to the fact that she began to see “almost

anything on the street as art.”

entrepreneur, through her father. She was in

her late teens and had been set on being an

artist since she saw a statue in the Rockland

library when she was nine. Nevelson took

stayed in the Martha Washington Hotel for

Women on East 29th and they went to see

the bracingly new Flatiron Building and the

Statue of Liberty. She rhapsodised about

“the water and the sky and this wonderful

Louise and Charles married in 1918 but

she was increasingly pulled apart by the

demands of home-making and making

art. “I continued my studies, and then my

child was born. The greater restriction of

a family life strangled me, and I ended my

marriage,” she observed flintily. Her child

was a son, Myron. Nevelson would earn a

reputation for ruthlessness but her friend

Marjorie Eaton would tell of her obsessive

guilt at her desertion of her family, of her

talking of it incessantly as she painted.

development as a young woman artist,

working her way into middle age, is

agonizing, but not quite as agonizing as it

must have been to live, because she was

such a late developer that it is essentially a

long preamble, a bildungsroman, with the

important buildings only popping up in

Nevelson would neither forget nor forgive

her years of privation.

the art world before the fame, the money.

there are squabbles; getting left out of

the radical Viennese architect, with Hans

Hofmann and with Baroness Hilda Rebay,

a force behind what was on its way to

becoming the Guggenheim Museum for

Non-Objective Art; and working, although

not as closely as she sometimes liked to

suggest, with the Mexican muralist, Diego

There was her outspokenly active sexlife

affairs” - which included flings with Kiesler

(probably) and Rivera (certainly). And

there are other more unexpected elements,

such as Nevelson’s interest in Spiritualism,

observation that “the fourth dimension is

the realm of the spirit and imagination,

of feeling and sensibility,” and notes a

suggestion that the Fourth Dimension is the

much occult hoopla in the art world these

days. It pursues other gods.

The art world differed in another

thirty years, working in near obscurity and

making no sales. She was given a show by

Karl Nierendorf, a dealer from Cologne,

who had opened a gallery close to MOMA

of New York’s best. Her show opened on

Nevelson, who was already drinking

heavily, fell into such a depression that she

actually found the daylight painful. Many

good artists were suffering similarly at

the time but Nevelson was also a “woman

woman, in time to check our enthusiasm.

hailed these sculptural expressions as by

surely a great figure among moderns. No

wonder Nevelson said of this period in a

television interview when she was 78: “You

too much. You have a place to go.”

Nevelson a solo show, her third, at New

York’s Norlyst Gallery. It was called The

Circus. That too was excellently received.

Again not one piece sold.

When the work was returned to her studio,

Nevelson, who was running short on space,

picked out a few bits and pieces for recycling

into future work, hauled the body

of the show out to the lot behind her Tenth

Street building and burned it.

Success came when Nevelson was pushing

sixty. How many hopefuls these days would

give it that long? Then the sales came,

the fame built. Life in 1958 described

her as “A sorceress at her desk.” But her

long-contained rage was always ready to

explode. When Alfred Barr asked her where

she had been all these years, Nevelson

- where the hell have you been?” Laura

Lisle relates how she sat at the bar at one of

her openings, in tears, and saying again and

Actually, the timing had been absolutely

resolved. Only now was she beginning to

produce the unerring series of sculptures

and collages such as these. Only Philip

to mind as a comparable late bloomer.

And Guston, of course, had been an early

Louise Nevelson, Robert Indiana and others,

There was both luck and happenstance

in Nevelson’s blossoming, but it’s the luck

and happenstance that you need to be able

to recognize and make work for you. Lisle

notes that in 1957 Louise Nevelson got

a crate of liquor as a Christmas present.

crates were Cubist, and Cubism was her

enduring passion, but it was a Cubism

without spatial illusion, unless you count

the shadows as illusion. And the crates were

her bits and pieces. Ahead lay the great wall

As for these collages they are another

repository for her essential bits and pieces.

The pieces Nevelson liked to show off,

turn into something else, build with, play

she had begun collecting as a girl of six in

Louise Nevelson in the kitchen of her East 30th

Personage, completed in 1956; Photograph by

The way I think is collage

All rights reserved. No part of this publication may be reprinted

or reproduced in anyform or by any electronic, mechanical, or other means,

now known or hereafter invented, including photocopying and recording,

or in any information retrieval system, without prior written permission from the copyright holders.