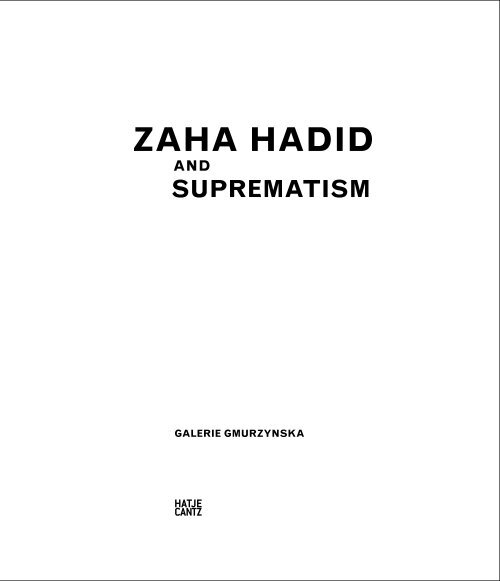 Zaha Hadid and the

Museum of Applied Arts (MAK) in Vienna. I looked through the guest

book. Contemporary artists, architects, and designers who had stayed

there had all left their notes. Some made drawings and caricatures;

others, collages. An architect even developed some plans for the

positioning of furniture in the space. Everybody thanked Peter Noever,

the (now former) director of the museum, for exhibitions, seminars, and

art events. One of the pages in particular contained quite an unusual and

linear graphic composition with an extremely dynamic structure, as if it

were trying to push itself out of the space of the book. The signature by

Zaha Hadid made everything clear. This drawing for me epitomizes the

code, the algorithm of her creativity.

shapes and shells of architecture encapsulate space. The drawing

reflected an impetuous dynamism of forms and temperamental energy.

The lines of the composition defined

the direction of the movement and

the status of artistic forms in their

own respect in the works of Vasily

Both Kandinsky and Rodchenko were

in a composition. Kandinsky reflected

on the perception of linear forms, on

“understanding” their language; for

him, the line became the media to

lines were first and foremost a

According to Kandinsky, the line when it is liberated from rigid

instruments (like the ruler and compass) becomes more flexible. Linear

modulations can reveal “the slightest gradation of artistic feeling.” In his

article published in the magazine Iskusstvo (Art) in 1919, dedicated to the

importance of the line in the arts, Kandinsky suggested some preliminary

classification of lines according to their influence on the spectator:

“. . . there can and do exist cheerful lines, gloomy and serious lines, tragic

the same way, musical lines, according to their character, are denoted

as allegro, grave, serioso, scherzando.” 1 In his famous later text Point and

Line to Plane, he wrote: “. . . every phenomenom of the external and of the

internal world can be given linear expression—a kind of translation.” 2 The

line is the basis of a language that expresses emotions, energy, rising up,

falling down, rhythm, and motion.

On the other hand, Rodchenko used lines as instruments for designing,

projecting, and creating something that did not exist before. He treated

the line as a trace of some definite technological operation: cutting,

welding, overlapping, sectioning, and so on. The line as the basis of a

language of structure and organization. For Rodchenko, any composition

emerges from the foundation of its linear scheme.

hand, its bordering and on-edge relationship, and on the other—as a factor

of the main construction of every organism that exists, the skeleton, so to

speak (or the foundation, carcass, system). The line is the first and the

last, both in painting and in any construction at all. The line is the path of

In the line a new world view became clear: to build in essence, and not

structures in life and not from life and outside of life. 3

space outside the gallery. Artists whose concept is the environment, not

just the picture on the wall.

The idea of the expansion of forms in

space and the close relationship of the

works by Zaha Hadid with the Russian

of the exhibition The Great Utopia at the

Solomon R. Guggenheim Museum in the

1990s. It happened so that the exhibition

environment created by Zaha Hadid at that

integrates works of art into an environment

that she herself has created. Who dominates

in this competition: the work of art or the

exhibition installation? A lot of visitors to

the Guggenheim Museum confessed that the exhibition installation helped

them to better understand Kazimir Malevich, Gustav Klutsis, or Vladimir

Tatlin. Understanding by feeling the space. The exhibition defined their

perception of the artistic world of the Russian avant garde. In the 1920s

art. Exhibitions looked as if objects were just taken out of the workshop.

By the end of the twentieth century, it became a sort of rule for

the environment on a larger scale than the art pieces themselves. The

of the composition—creates the necessary tension to help the spectator

find his place and his mode of perception in this environment. Quite

often the exhibition architecture is a sort of

which speaks the same language as the

objects it is incorporating. The last exhibition

at Galerie Gmurzynska created another

through the ages with the artists of the

I remember another exhibition where

Zaha Hadid represented herself as an

architect. It was a small exhibition at the

VKhUTEMAS Gallery (which is now part of

the Moscow Architectural Institute). The

forms reminiscent of the exponentially

englarged iMac monoblocks of the late

1990s. The visitors were moving amidst

Boris Korolev, drawing for the Temple of Communication of the

and architectural synthesis) group, organized in 1919 in Moscow

Fine Arts of the People’s Commissariat for Education.

houses. From inside, the projectors were constantly displaying visuals.

Those giant computers were exposing a never-ending flow of transforming

Zaha Hadid’s exhibition and architectural projects are very special in

terms of scale. She works within an extra-large environment of space,

within which smaller works of art look quite cozy. Her perception of the

Kazimir Malevich. “Our Earth, the surface of the Earth is not organized. It

is covered with seas and mountains. Some kind of Nature exists. I would

like to create Suprematist Nature according to the laws of Suprematism

instead of this Nature,” 4 Malevich once explained to Osip Brik, a critic and

director of the Institute of Artistic Culture (INKhUK) in Moscow in 1922–24.

Malevich and his perception of the world offers another meeting point

for Zaha Hadid and the Russian avant garde. Hadid works with great

innovator, comparable to the talent of Malevich and his idea of converting

the surface of the Earth into various series of Suprematist spatial

statement. The same visual-plastic statements are architectural and

environmental objects designed by Zaha Hadid. Quite a lot in terms of her

spatial compositions is close (but not similar) to Malevich’s works. The

use of empty space, the energy of her will in place of the elements, the

freedom and force of visual statements. And of course a sense of scale.

Malevich used a number of forms that did not have exact proportions,

which could be small or enormous at the same time: the square, the circle,

the cross. The preferred scale of Zaha Hadid is quite huge. But she never

uses forms in exactly the same way as Malevich. Her visual language is the

language of the topological transformation of complex curvilinear forms,

ovoids. But the principle of the structural unity, the fractal principle is

quite close to that of Malevich’s Architektons.

most important basic function, not

only of protection or shelter, but one

connected to orientation in space.

Architectural forms have to explain

visually to people the qualities and

character of the space surrounding

them. Scales and proportions,

geometry, lightness or weight, and

so on. This is achieved by means of

divisions of walls into panels or

windows, the number of columns or

their absence, the character of the

Some spaces indicate an entrance and

subconsciously we move inside, others

organize our movement and show the

Stalactite caves in order to astonish

turned upside down, 1920s. From the propaedeutic discipline

elements, 1919. The drawing was executed during Rodchenko’s

participation in the Zhivsculparch (painting, sculpture, and architectural

synthesis), a group organized in 1919 in Moscow within the architectural

us, and others explain how the ensemble of buildings is organized, where

we are at the moment. Some architectural forms stress fluidity, some—

Nikolai Ladovsky developed a series of propaedeutic exercises for

future architects at the school of VKhUTEMAS (Higher Artistic-Technical

Workshops) in Moscow in 1920–22, based on the composition of space.

Those exercises were first abstract and then based on concrete items.

Zaha Hadid, drawing in the guest book of the Museum

Depending on the type of buildings, some

compositional characteristics could be

dominating. Some works by Zaha Hadid—

for instance the project of the Innovation

Tower in Hong Kong or the library in

Seville—can be regarded as the development

of some of Ladovsky’s tasks, where

extreme lightness or heaviness are

compositionally stressed by means of

architectural forms. The whole system of

Ladovsky’s exercises was based on the

Cubist approach to form. Forms are

divided by sections into pieces which move

and freeze at some moment, giving birth

to an architectural image. What we see in

works by Zaha Hadid is, in her own words,

What is space? It is an interesting and

Moscow, has discovered the phenomenon

of “blurred silhouettes, uncertain and

ephemeral images” 5 in contemporary architecture. She found the echo

a cross-disciplinary theoretical concept of the nineteenth and twentieth

century. She did an analysis of Zaha Hadid’s building and found the

repeating motif of the cloud-like form. In general, this idea is very close

to the paintings from Malevich’s series White on White, as well as

Rodchenko’s Dissolution of the Surface. In both cases, the paintings by

Malevich and Rodchenko stress the mutual influence of space and form

and the miraculous things that happen at their flexible border.

According to Ladovsky, the main material of architecture is space. Yet

it is not just emptiness. Architectural space is a gap articulated by means

of architectural forms. The qualities of these articulated intervals can

suppress or elevate, explain the structure of the environment, form an

attitude toward the building.

of Zaha Hadid? Generally it is not emptiness, neither of form nor structure.

I think it deals more with motion, dynamics. The same goes for dynamic

compositions in paintings of the avant-garde artists, which uncover the

hidden inner life in these works of art. Dynamism makes our perception

more efficient, it draws us into the artistic space.

The similarity of architectural objects designed by Zaha Hadid to the

Russian avant garde does not mean that she moves inside this tradition. In

fact, she helps this tradition to develop. Thanks to her work, we can observe

this tradition as livable and workable. The principle of fractals as the idea

of multiple levels of complexity; topological transformations as complex

curved shells and surfaces; the idea of cells creating a sort of architectural

tissue; a membrane as a border. All of these ideas she embodies in the

same minimalistic compositional manner as artists of the avant garde

embodied their “styles” and “isms.” They foresaw the world and the

perception of the world that was going to emerge through the ages. We

have already been living in the era of the avant garde for a whole century.

(“Little Articles on Big Questions: II. On Line,” Art: Bulletin of the Department

of Visual Arts in the People’s Commissariat for Enlightenment), vol. 4

3 Alexander Rodchenko, “The Line,” Experiments for the Future: Diaries,

Essays, Letters, and Other Writings, exh. cat. The Museum of Modern Art

Mikhail Korzhev, student project of a warehouse, 1922. Second part of the compositional task