Unterseen – The Starting Point for Excursions to the Glaciers 8

Unspunnen – A Festival for Reconciliation between City and Countryside 16

The Development of Tourism around the Höheweg 20

Lauterbrunnen – The Valley of Roaring Waterfalls 26

Mürren – Spectacular Location at the Foot of Schilthorn 30

Wengen – Panoramic Terrace at the Foot of Eiger, Mönch and Jungfrau 36

The Jungfrau Railway – An Achievement of a Century 48

The Grindelwald Glaciers and Tourism 60

The Lower Grindelwald Glacier – Jewel and Ornament of the Area 64

When the Glacier was Still a Sea of Ice 70

The History of the Jungfrau Region at a Glance 104

The unique mountainous and glacial landscape of the Jungfrau region has

world. This volume provides an insight into the historic and touristic development

of the Jungfrau region from the beginning of tourism to today. The

first travellers came because of the glaciers, which were considered a natural

their rugged north faces and inhospitable glaciers and the lovely cultivated

landscape with green meadows, was a great fascination for the tourists.

and trains dotted the landscape. Within a few years, Grindelwald, Mürren

and Wengen grew from mountain farming villages to internationally known

retreat of the glaciers in recent years, due to climate change, markedly

altered the landscape. Despite these fundamental changes, the region has

not lost its attractiveness. In 2001, the “Swiss Alps Jung frau-Aletsch Region”

was named a UNESCO World Heritage Site. With the triumvirate of

Eiger, Mönch and Jungfrau and the high alpine glacial landscape, it is one

of the most spectacular mountain landscapes in the Alps.

“The Jungfrau Region – Then and Now” documents the changes in the

ecology, landscape and settlement structure. By flipping the transparencies

over the images, these changes between then and now are revealed right

before your eyes. Furthermore, impressive pictures highlight the history of

the so-called Classic Oberland Tour, or “Oberland Cher,” as it is called by

the locals. This very popular 19 th century round trip led from Interlaken to

Lauterbrunnen, then on foot, horseback or carried by chair up to Wengen,

then onto the pass over Kleine Scheidegg to Grindelwald. The second part

of the tour passed over Grosse Scheidegg via Rosenlaui to the Haslital, to

Meiringen and from there back to Interlaken. The Classic Oberland Tour

served travellers’ basic cultivation and was the epitome of European travel

culture and the core of every Swiss trip. The construction of the Wengernalp

Railway in 1893 heralded the decline of the Classic Oberland Tour.

Unterseen – The Starting point for Excursions to the Glaciers

In the Middle Ages, Unterseen was an important

and annual markets were held. Around 1750,

the development of tourism had already begun

in Unterseen, much earlier than in neighbouring

came by ship across the Lake of Thun

to Unterseen. With its picturesque corners and

idyllic position on the Aare, as well as the unobstructed

view of the Eiger, Mönch and Jungfrau,

the town was a popular destination. The great

On the transparency image right, the Aare

is still visible in its entire width. In 1855, the

locks were removed and later, the river flow was

corrected. Because of the canal construction, the

road had to be relocated. Thus, Unterseen was

cut off from passing traffic, falling out of the

The positive result for Unterseen was that the

For centuries, the relationship between Interlaken

and Unterseen was characterized by

and Matten are closely interwoven as a

tourism and economic region. However, a political

union of the three municipalities has never

Transparency: Unterseen at the beginning of the 19 th century. The Aare with the Aare Falls before canalization.

Photo: Unterseen today. The Aare has been canalized since the towards the end of the 19 th century.

1 Untere Gasse from Unterseen around 1840 with the Stadthaus and

the castle (in the background).

has retained its original character.

3 Picturesque Stadthausplatz in the mid-19 th century. The German composer

Felix Mendelssohn-Bartholdy stopped at the Stadthaus on his trip

towards Unterseen (from left). In

the background is the Unspunnen castle.

2 Unterseen with people at the market

at the square “unter den Häusern” in the

of the picture is the bridge to Helferinseli,

a small island, and on the left, is the grand

house on Spielmatte. The Jungfrau can be

seen in the background.

3 Evening mood on the Aare in Unterseen

today. In the centre of the picture, the old

wooden bridge constructed in 1855 on the

The name ‘Interlaken’ comes from the Latin ‘inter

lacus’, which means ‘between the lakes’, an

appropriate name since Interlaken lies between

‘Interlaken’ first appears in connection with the

founding of the Augustinian monastery in Interlaken,

a hugely significant milestone in the

economic and cultural development of the entire

The upper picture opposite shows Interlaken

from a perspective favoured by many painters.

These artists were fascinated by the unobstructed

view of the Jungfrau. Musicians such as Richard

sohn Bartholdy, and writers such as Goethe, Leo

Tolstoy and Mark Twain, were inspired by this

climate quickly led to the establishment of Interlaken

in the 19 th century as an internationally

especially popular. Tourism flourished with the

expansion of steamship routes on the Lakes of

to boom as a tourist destination until 1910.

This was the time of the ‘Belle Époque’, during

which many luxurious hotels opened and were

visited by the wealthy bourgeoisie. This boom

ended abruptly in 1914 with the outbreak of the

First World War. The upturn in tourism did not

Today, Interlaken is one of the most important

tourist destinations in Switzerland. Because of

its central location and excellent transportation

for excursions to the surrounding valleys. Interlaken

is especially popular with Asian tourists,

and increasingly with visitors from Arab countries.

A play about the national hero Wilhelm

Tell, is performed in the summer at the so-called

‘Tellspiele’, which also attracts many locals.

Picture above: Interlaken and Unterseen before the big hotel construction boom on Höheweg after the mid-19 th century and before the canalization of the Aare.

Picture below: Panorama of Interlaken and Unterseen today. The Jungfrau can be seen in the background.

“Who has not seen the landscape

of Interlaken, called the Bödeli,

does not know Switzerland; the

area between the Lakes of Thun

and Brienz is the most glorious in

1 The “Bödeli” with view of the Aare and

the Lake of Thun.

2 Interlaken in the mid-19 th century.

3 View towards Goldey and the viewpoint

Hohbühl, where many pictures of Interlaken

today, as seen from the top of the Harder

from the Rugen, then and now. In the background,

the Lake of Thun and the Niesen

Unspunnen – A Festival for Reconciliation Between City and Countryside

The Unspunnen Festival is a Swiss folklore event

with a long tradition. The first festivals of 1805

and 1808 had the aim of reviving the old pastoral

habitats and bridging the gap between

the rural population of the Bernese Oberland

and the aristocratic townspeople of Bern. Both

events were a great success, attracting between

beyond the borders of the country, triggering a

strong boost in the development of tourism.

Guests from Switzerland and abroad were

able to meet in a natural arena with the Jungfrau

in the background and become familiar with the

such as ‘Schwingen’, a type of wrestling,

stone-throwing and shooting were held. The socalled

“Unspunnen stone”, as it is known today,

is a colossal boulder weighing more than 80 kilograms.

The strongest men were able to toss this

stone up to four metres. This sports programme

was accompanied by entertainment such as yodelling

The Unspunnen Festival had other goals.

system in Europe and set in motion a change of

threatened the nature-based and traditional

way of life of the alpine people. In these times

of social and political upheaval, the Unspunnen

Festivals were a reminder of traditional values,

traditions and folk customs. At the same time,

the festivals were designed to strengthen Swiss

national awareness after the defeat by Napoleon.

The Unspunnen Festival was held again on

its centennial anniversary. Other events followed,

Transparency: The area where the alpine shepherd’s festival of Unspunnen took place in 1805 and 1808 – a natural arena with the Jungfrau as its backdrop.

Photo: The area of the first alpine shepherd’s festival today, from the same standpoint.

1 “Schwingen” at the alpine shepherd

festival in Unspunnen 1808. The Jungfrau in

2 The paintings by Élisabeth Vigée-Lebrun,

a prominent Parisian artist, made the

Unspunnen festival known beyond the

3 The alpine shepherds festival in Unspunnen.

The painting stems from F. Niklaus

Koenig, one of the most important initiators

of the Unspunnen Festival. His works contributed

much to the success of the alpine

1 “Schwinger” or wrestlers in the ring at

is a variation of wrestling and played on

sawdust. “Schwingen” dates back to the

tradition of alpine shepherds and today is

2–4 A programme with stone throwing,

traditional dancing, and other events

takes place on the Höhematte in Interlaken. 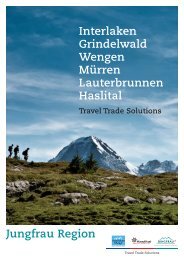 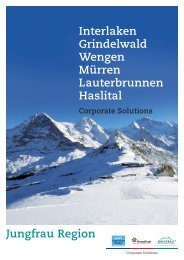 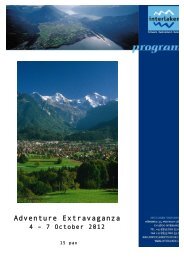 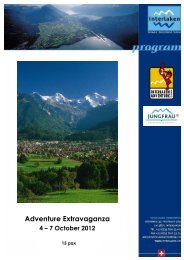 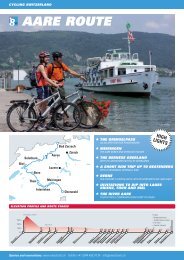 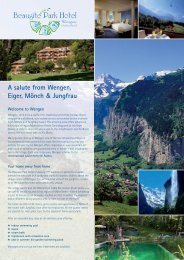 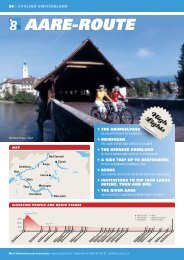 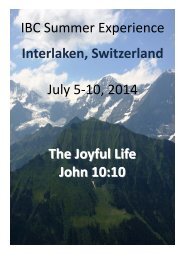