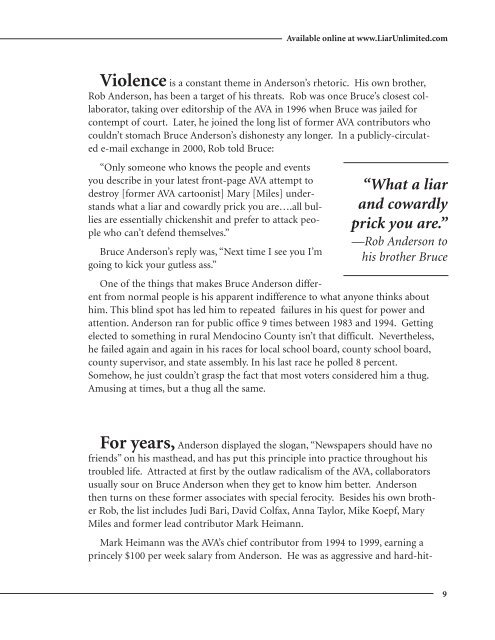 Violence is a constant theme in Anderson’s rhetoric. His own brother,

Rob Anderson, has been a target of his threats. Rob was once Bruce’s closest collaborator,

contempt of court. Later, he joined the long list of former AVA contributors who

couldn’t stomach Bruce Anderson’s dishonesty any longer. In a publicly-circulated

“Only someone who knows the people and events

you describe in your latest front-page AVA attempt to

what a liar and cowardly prick you are….all bullies

are essentially chickenshit and prefer to attack people

who can’t defend themselves.”

Bruce Anderson’s reply was, “Next time I see you I’m

going to kick your gutless ass.”

One of the things that makes Bruce Anderson different

him. This blind spot has led him to repeated failures in his quest for power and

attention. Anderson ran for public office 9 times between 1983 and 1994. Getting

elected to something in rural Mendocino County isn’t that difficult. Nevertheless,

county supervisor, and state assembly. In his last race he polled 8 percent.

Somehow, he just couldn’t grasp the fact that most voters considered him a thug.

Amusing at times, but a thug all the same.

For years, Anderson displayed the slogan, “Newspapers should have no

friends” on his masthead, and has put this principle into practice throughout his

troubled life. Attracted at first by the outlaw radicalism of the AVA, collaborators

usually sour on Bruce Anderson when they get to know him better. Anderson

then turns on these former associates with special ferocity. Besides his own brother

princely $100 per week salary from Anderson. He was as aggressive and hard-hit-