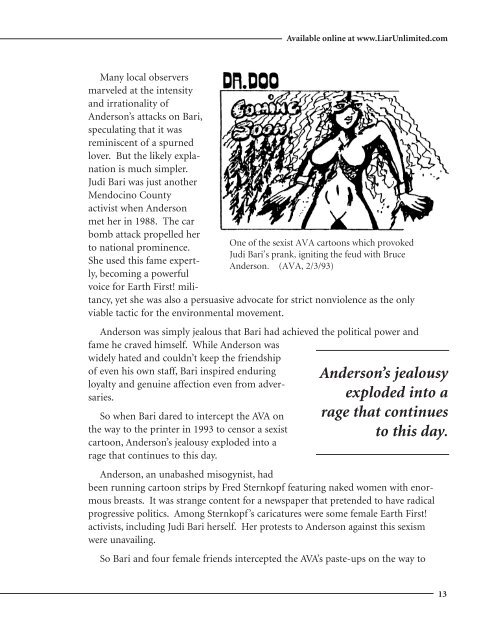 marveled at the intensity

speculating that it was

reminiscent of a spurned

lover. But the likely explanation

Judi Bari was just another

She used this fame expertly,

tancy, yet she was also a persuasive advocate for strict nonviolence as the only

viable tactic for the environmental movement.

fame he craved himself. While Anderson was

of even his own staff, Bari inspired enduring

loyalty and genuine affection even from adversaries.

So when Bari dared to intercept the AVA on

the way to the printer in 1993 to censor a sexist

cartoon, Anderson’s jealousy exploded into a

rage that continues to this day.

One of the sexist AVA cartoons which provoked

Anderson, an unabashed misogynist, had

breasts. It was strange content for a newspaper that pretended to have radical

progressive politics. Among Sternkopf’s caricatures were some female Earth First!

activists, including Judi Bari herself. Her protests to Anderson against this sexism

<strong>Liar</strong> <strong>Unlimited</strong>: The lurid history of <strong>Bruce</strong> <strong>Anderson</strong> and the <strong>Anderson</strong> Valley Advertiser 12 hand over the letter. This prompted hilarity among local observers, with Judi Bari circulating a cartoon of him over the caption, “Ruff Tuff Crème Puff.” “I guess I was having caffeine withdrawal,” <strong>Anderson</strong> later explained. But his surrender was rejected by the judge. The AVA produced only a typewritten copy of the letter, without a signature, claiming it was the only version the newspaper had ever received. The judge demanded the original and sent <strong>Anderson</strong> back to jail. “<strong>Anderson</strong>, handcuffed and wearing orange jail garb, was visibly shaken Wednesday afternoon by the prospect of returning to an isolation cell at the Mendocino County Jail…” reported the Santa Rosa Press Democrat (5/30/96). Despite his craven retreat from his bombastic vow, <strong>Anderson</strong> ended up a martyr after all, and reaped what the Santa Rosa Press Democrat called a “frenzy” of media attention. Eight days later, <strong>Anderson</strong> was finally released, after his wife and typesetter both took the witness stand and swore that the typewritten version was, indeed, the only copy the AVA had ever received. Ultimately, Lincoln was acquitted after lawyer Tony Serra convinced the jury that the nighttime shooting was self-defense. Of all his hatreds, none has consumed <strong>Bruce</strong> <strong>Anderson</strong> more than his 13-year feud with Judi Bari. Judi was an indomitable spirit who would never back down to a bully. So it’s no surprise <strong>Anderson</strong> stepped up his attacks AFTER her death, when she could no longer answer him. Judi Bari, my wife from 1981 to 1988, was an incandescent Earth First! leader who created the Redwood Summer protests of 1990. Just as Redwood Summer drew near, she was seriously injured in a car bomb attack in Oakland, California, on May 24, 1990. The bomber has never been identified but Bari was convinced she was targeted by the timber industry. The bombing brought her national attention, especially after the FBI arrested her and falsely accused her of carrying the bomb herself. The charges were dropped for lack of evidence. Bari and her passenger in the car, Darryl Cherney, sued for civil rights violations. Ultimately, this lawsuit led to a precedent-setting $4.4 million verdict in federal court in 2002.