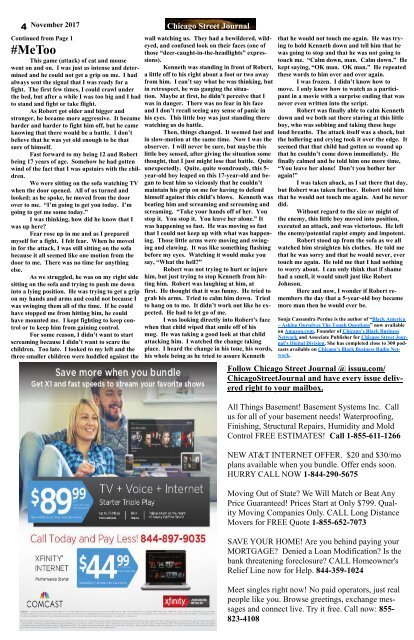 #MeToo addresses the sexually abuse of men, women and children around the world. You are invited to submit your editorials on this and any timely matter to ChicagoStJournal@gmail.com.

This game (attack) of cat and mouse

went on and on. I was just as intense and determined

and he could not get a grip on me. I had

always sent the signal that I was ready for a

fight. The first few times, I could crawl under

the bed, but after a while I was too big and I had

to stand and fight or take flight.

As Robert got older and bigger and

harder and harder to fight him off, but he came

knowing that there would be a battle. I don’t

believe that he was yet old enough to be that

Fast forward to my being 12 and Robert

being 17 years of age. Somehow he had gotten

wind of the fact that I was upstairs with the children.

We were sitting on the sofa watching TV

when the door opened. All of us turned and

looked; as he spoke, he moved from the door

going to get me some today.”

I was thinking, how did he know that I

Fear rose up in me and as I prepared

myself for a fight. I felt fear. When he moved

in for the attack, I was still sitting on the sofa

because it all seemed like one motion from the

door to me. There was no time for anything

As we struggled, he was on my right side

sitting on the sofa and trying to push me down

into a lying position. He was trying to get a grip

on my hands and arms and could not because I

was swinging them all of the time. If he could

have stopped me from hitting him, he could

have mounted me. I kept fighting to keep control

or to keep him from gaining control.

For some reason, I didn’t want to start

screaming because I didn’t want to scare the

children. Too late. I looked to my left and the

three smaller children were huddled against the

wall watching us. They had a bewildered, wildeyed,

and confused look on their faces (one of

Kenneth was standing in front of Robert,

from him. I can’t say what he was thinking, but

in retrospect, he was gauging the situation.

Maybe at first, he didn’t perceive that I

was in danger. There was no fear in his face

and I don’t recall seeing any sense of panic in

his eyes. This little boy was just standing there

watching us do battle.

Then, things changed. It seemed fast and

in slow-motion at the same time. Now I was the

observer. I will never be sure, but maybe this

little boy sensed, after giving the situation some

thought, that I just might lose that battle. Quite

unexpectedly. Quite, quite wondrously, this 5-

year-old boy leaped on this 17-year-old and began

to beat him so viciously that he couldn’t

maintain his grip on me for having to defend

himself against this child’s blows. Kenneth was

screaming. “Take your hands off of her. You

that I could not keep up with what was happening.

Those little arms were moving and swinging

before my eyes. Watching it would make you

Robert was not trying to hurt or injure

him, but just trying to stop Kenneth from hitting

him. Robert was laughing at him, at

first. He thought that it was funny. He tried to

grab his arms. Tried to calm him down. Tried

to hang on to me. It didn’t work out like he expected.

I was looking directly into Robert’s face

when that child wiped that smile off of his

mug. He was taking a good look at that child

attacking him. I watched the change taking

place. I heard the change in his tone, his words,

his whole being as he tried to assure Kenneth

that he would not touch me again. He was trying

to hold Kenneth down and tell him that he

was going to stop and that he was not going to

these words to him over and over again.

I was frozen. I didn’t know how to

move. I only knew how to watch as a participant

in a movie with a surprise ending that was

never even written into the script.

down and we both sat there staring at this little

boy, who was sobbing and taking these huge

loud breaths. The attack itself was a shock, but

the hollering and crying took it over the edge. It

seemed that that child had gotten so wound up

that he couldn’t come down immediately. He

finally calmed and he told him one more time,

“You leave her alone! Don’t you bother her

I was taken aback, as I sat there that day,

but Robert was taken further. Robert told him

that he would not touch me again. And he never

the enemy, this little boy moved into position,

executed an attack, and was victorious. He left

the enemy/potential rapist empty and impotent.

Robert stood up from the sofa as we all

watched him straighten his clothes. He told me

that he was sorry and that he would never, ever

touch me again. He told me that I had nothing

to worry about. I can only think that if shame

had a smell, it would smell just like Robert

Here and now, I wonder if Robert remembers

the day that a 5-year-old boy became

more man then he would ever be.

Sonja Cassandra Perdue is the author of “Black America

Digital Division. She has completed close to 300 podcasts

ChicagoStreetJournal and have every issue delivered

right to your mailbox.

us for all of your basement needs! Waterproofing,

Moving Out of State? We Will Match or Beat Any

SAVE YOUR HOME! Are you behind paying your

MORTGAGE? Denied a Loan Modification? Is the

February Chicago Street Journal November 2017 5 CHICAGO POLITICS – Keep an eye on Chicago City Council Meetings from the comfort of your home by viewing live streaming or archives of past meetings. For each City Council meeting, the Office of the City Clerk provides live streaming video, including captions, on their Council News Central page. To watch live click HERE. For more information on attending a Chicago City Council meeting, please contact the Chicago City Council Sergeant-at-Arms at 312-744-6800 or via email. (CityCouncilSeating@cityofchicago.org) EDUCATION - Is 5 years of age too young to start learning about stocks and bonds? John Rogers, CEO of Ariel Investments, doesn’t think so and is currently involved in creating future financial professionals at the Ariel Community Academy located on the south side of Chicago. In a recent interview with Black Enterprises, Mr. Rogers stated that, “First, we wanted our students to be really comfortable with the stock market.” He also indicated that, “...it’s critical for young people to start out with a sound financial footing.” CRIME – The trial for alleged Chicago west side street gang leaders Cornel Dawson and Terry Odum will be the first test in Cook County of Illinois’ racketeering law. The new law was passed in 2012 and permits prosecutors to hold crime bosses accountable for the actions of the entire gang. More than 20 purported Black Soul members were arrested in 2013 under this statute. SPORTS – Love Basketball? Sherman Park will be hosting a Basketball Skills Camp for ages 9 – 18 every Friday from 3:30 pm – 6 pm at 1301 W. 52 nd Street. According to Dr. Health Benefits.com, being involved with sports helps youth control weight, build endurance, improves mental development, helps develop socialization skills and it’s just plain fun. BOOKS – Author Matt Taibbi’s book “I Can’t Breathe” was just released. Those words launched a nation outcry and prompted protest by the “Black Lives Matter” movement in response to the death of Eric Gardner at the hands of New York police officers in July of 2014. SUBMIT YOUR EVENTS TO CSJ – #FREE insertion in the next edition. Chicago Street Journal (CSJ) will be launching an event page in its next issue. And, you are invited! Submit your event with title and 100 words or less description for a free insert. This is a limited time offer, so get on board and let our Chicago readership know where you’ll be hosting your next networking, tech or nonprofit get-together. (Only one free insertion every six months.) Click HERE to submit. Click the images to order your personalized mug today! 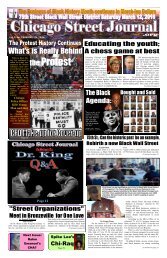