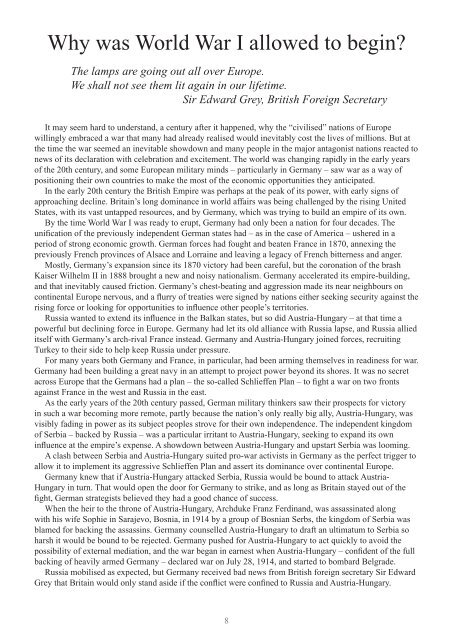 Why was World War I allowed to begin?

The lamps are going out all over Europe.

We shall not see them lit again in our lifetime.

It may seem hard to understand, a century after it happened, why the “civilised” nations of Europe

willingly embraced a war that many had already realised would inevitably cost the lives of millions. But at

news of its declaration with celebration and excitement. The world was changing rapidly in the early years

of the 20th century, and some European military minds – particularly in Germany – saw war as a way of

positioning their own countries to make the most of the economic opportunities they anticipated.

In the early 20th century the British Empire was perhaps at the peak of its power, with early signs of

approaching decline. Britain’s long dominance in world affairs was being challenged by the rising United

States, with its vast untapped resources, and by Germany, which was trying to build an empire of its own.

By the time World War I was ready to erupt, Germany had only been a nation for four decades. The

period of strong economic growth. German forces had fought and beaten France in 1870, annexing the

previously French provinces of Alsace and Lorraine and leaving a legacy of French bitterness and anger.

Mostly, Germany’s expansion since its 1870 victory had been careful, but the coronation of the brash

and that inevitably caused friction. Germany’s chest-beating and aggression made its near neighbours on

continental Europe nervous, and a flurry of treaties were signed by nations either seeking security against the

rising force or looking for opportunities to influence other people’s territories.

Russia wanted to extend its influence in the Balkan states, but so did Austria-Hungary – at that time a

powerful but declining force in Europe. Germany had let its old alliance with Russia lapse, and Russia allied

itself with Germany’s arch-rival France instead. Germany and Austria-Hungary joined forces, recruiting

Turkey to their side to help keep Russia under pressure.

For many years both Germany and France, in particular, had been arming themselves in readiness for war.

Germany had been building a great navy in an attempt to project power beyond its shores. It was no secret

against France in the west and Russia in the east.

As the early years of the 20th century passed, German military thinkers saw their prospects for victory

in such a war becoming more remote, partly because the nation’s only really big ally, Austria-Hungary, was

visibly fading in power as its subject peoples strove for their own independence. The independent kingdom

of Serbia – backed by Russia – was a particular irritant to Austria-Hungary, seeking to expand its own

influence at the empire’s expense. A showdown between Austria-Hungary and upstart Serbia was looming.

allow it to implement its aggressive Schlieffen Plan and assert its dominance over continental Europe.

Germany knew that if Austria-Hungary attacked Serbia, Russia would be bound to attack Austria-

Hungary in turn. That would open the door for Germany to strike, and as long as Britain stayed out of the

fight, German strategists believed they had a good chance of success.

When the heir to the throne of Austria-Hungary, Archduke Franz Ferdinand, was assassinated along

with his wife Sophie in Sarajevo, Bosnia, in 1914 by a group of Bosnian Serbs, the kingdom of Serbia was

blamed for backing the assassins. Germany counselled Austria-Hungary to draft an ultimatum to Serbia so

harsh it would be bound to be rejected. Germany pushed for Austria-Hungary to act quickly to avoid the

possibility of external mediation, and the war began in earnest when Austria-Hungary – confident of the full

Grey that Britain would only stand aside if the conflict were confined to Russia and Austria-Hungary.