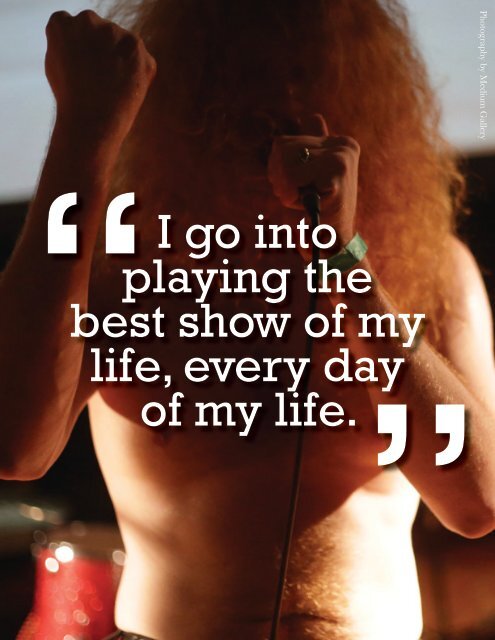 CUSP Magazine is a Chicago based publication focused on helping up and coming creatives gain exposure for their brand and products. Our company is a collective of highly motivated individuals who work together to bring a new voice to the creative community.

best show of my

MUSIC FEATURE//WHITE MYSTERY 68 “The whole brother-sister dynamic lent an organic flow to it.” White Mystery officially came to life on April 20, 2008; the Whites celebrate the anniversary every year with a release on the same date. “We decided we would be a band for 10 years total. No moving away, no backing down, no matter what.” Alex said. Six years and four full-length albums later, White Mystery is still going strong—and the siblings attribute much of their initial success to their hometown’s rich legacy as a hub for DIY music. It is no wonder a plethora of intimate DIY spaces have cropped up in basements, backyards and bars in youth-centric neighborhoods across Chicago. Given its history as a self-made city, Chicago artists aren’t afraid of hard work. Considered by many to be a fixture in the scene, White Mystery started by playing small local shows. Despite growing national success, Alex and Francis can still be found playing at DIY venues and festivals around the city. “The best kind of shows are the ones where you can really connect with people,” Alex said. “The DIY scene is really awesome for meeting other young punks.” In fact, one of White Mystery’s recent memorable collaborations arose out of a connection made locally. Alex and Francis met up and coming rock n’ roll three-piece band, the Holy Motors, at one of White Mystery’s own shows during the summer of 2013. The band’s lo-fi sound and rich, baritone vocals make them right at home in Chicago. “It was really cool because we started out as fans,” Alex recalled. Opportunity for collaboration sadly arose out of tragedy. The untimely passing of influential garage rocker, and friend of White Mystery, Jay Reatard brought the Whites together with the Holy Motors for work on a tribute album with French label, Teenage Hate Records. Teenage Hate Records released their first limited edition vinyl tribute to Reatard this past February. The compilation on which Holy Motors and White Mystery collaborated will be available in 2015. In the late 2000s, DIY venues across the city felt the pain from local authorities following a citywide crackdown on live music permits. Largely thanks to Paul Natkin, famed photographer, <strong>CUSP</strong> MAGAZINE WINTER ’14 ISSUE skilled networker, and friend and mentor to Alex White, the scene pulled through and so did White Mystery. Aside from being an influential force in the survival of Chicago’s punk and garage rock movement, rock and roll photographer Paul Natkin encouraged Alex to take a plunge into a full-fledged artistic lifestyle. “Paul was a friend of my mom’s in the 70’s. He would take me out to lunch sometimes and one day asked why I wasn’t doing [music] full-time. I was 24.” Although she was playing shows every weekend and touring nationally and internationally with White Mystery, Alex still worked a day job at a Busy Beaver Button Company in Logan Square. “I can’t say I was comfortable making [such a] big leap but I didn’t want to still be working an office job at 26,” Alex said. Following the conversation with Paul, Alex saved every penny, quit her day job and began booking White Mystery shows every day. In the 6 years since White Mystery’s naissance, Alex and Francis have played almost 1000 shows in 20 countries. They’ve booked major music festivals, like South by Southwest and Riot Fest, and performed with names as illustrious as Robert Plant and Weezer. The Whites’ powerful live shows and polished studio recordings only fuel the momentum of their redheaded fury. “I go into playing the best show of my life, every day of my life,” Alex said. Alex’s heavy, virtuosic riffs, provoke memories of the White Stripes or MC5, and perfectly balance her soaring vocals. Francis first ignites audiences with wild thrash-worthy drum sets before guiding them on decidedly psychedelic journeys rife with poetic, reverb-heavy improvisation. These energetic and effortlessly charismatic performers never fail to treat their audience to an unforgettable show. The performances, in part, have earned White Mystery sponsorships from a number of prestigious companies. Alex and Francis have worked with Levi, Orange Amplification, C&C Custom Drums and even Airhead and Pretzel Crisps. Much like their stance on record labels, the Whites are stringent when selecting partnerships, only entering into mutually supportive relationships.

Photography by Medium Gallery I go into playing the “of best show of my life, every day my life. “ 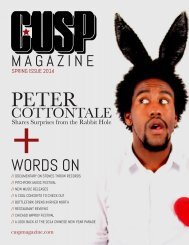 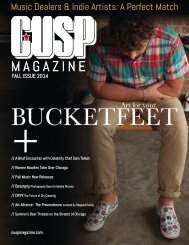